Liguria Nautica » Boating in a Portrait » Boating in A Portrait | Achille Pennellatore: “I had an uncle who was a fisherman who had an aneroid barometer. And so I became passionate about meteorology”

Boating in A Portrait | Achille Pennellatore: “I had an uncle who was a fisherman who had an aneroid barometer. And so I became passionate about meteorology”

The well-known meteorologist from Sanremo, specialised in the weather forecast regarding the sea, tells us how his passion for meteorology began. In nearly 40 years, he has not made any resounding errors Achille “Kiki” Pennellatore is a well-known meteorologist in Sanremo, specialised in the weather forecast regarding the sea. In nearly 40 years he has never made any resounding errors. At most, he made a mistake on the time a storm would move in. But regarding the sea, wind and dangerous phenomena, he has always given, ahead of time, a picture which then corresponded to reality.

For years Achille Pennellatore has worked, giving assistance and “consultancy” on the weather to boats anchoring in the tourist port of San Remo, Portosole, for Rai 3 Liguria, other newspapers, and more. His weather forecasts are available on his social media channels and often in Ligurian newspapers, who consult with him as one of the best experts in the field. In 2004 he was nominated Console del Mare, in 2009 Ambasciatore del Mare and in June he received, from Ucina Confindustria Nautica, the award, “Pioniere della Nautica”.

Achille Pennellatore, how did you discover the sea and boating?

From 1955 to 1970 I lived over the port of Bordighera, a tiny marina which has now gotten bigger. From my bedroom window, I could see the Via Aurelia, the train line and a large tract of the sea, all the way to Corsica on clear days. I fell in love with this view and, in my free time from studying and homework, I would spend hours at the window watching the comings and goings of the different transport vessels.

I then studied all types of public transport for people, like trains, buses, electric buses, airplanes, cable cars and, naturally, the vehicles traversing the seas in front of my window, so much so that I have already published four books on this topic.

These were the times of the great transatlantic ships, Leonardo da Vinci, all the Costas, Raffaello, Michelangelo and Cristoforo Colombo. Then there were also smaller vessels shuttling tourists between Sanremo, Imperia and the towns of the Cote d’Azur: the Gallus, La Città di Sanremo, the two hydrofoils, the hovercraft and the Glentor of Commendator Gamberini, previously owned by the actress Greta Garbo. It is difficult for someone who sees this reality to not discover a passion for the sea and the vessels crossing it.

How did you fall in love with meteorology, so much so that you became a professional?

In our house in Bordighera we had as neighbours, a large number of fishermen who at that time, went out using skiffs and many of these were our cousins. Even my grandmother, Richéta went fishing, she didn’t go on the boats with the men, but took care of them, pulling in the nets when they arrived in the early morning on the beach of Arziglia, she helped them mend the nets and brought the fish with a cart, on foot to Ospedaletti and Sanremo.

There was also an uncle who was a fisherman, U Barba Augusto Ganduglia, one of the first who, in addition to having empirical notions on the wind and clouds, inevitably, for a fisherman, he had at home, an aneroid barometer. I was three years old, and I was curious, every time he had to go out to sea, he would tap on its face to make the hand move to the left or to the right.

I was even more curious when the hand would turn to the left, the weather would have worsened, if it went to the right, it would be better. There, that is when the spark ignited and I decided to learn more about meteorology. All the gifts I then asked Baby Jesus for were, thermometers, hygrometers, etc. When I was older, for every birthday or as a reward for passing school, the gifts were bigger, sophisticated radio equipment, anemometers, pluviometers and even a SIAP Stevenson Screen, which is still working today and, I hope, for a long time still.

How is your work day? What sources do you consult and how do you study the weather?

Today, with the help of computers and internet it is all easier. First of all, three complete observations a day from my station and other weather stations. Then the consultation of a number of atmospheric models up to 144 hours in order to make a forecast, meaning GFS, LAMMA, Aeronautica Militare, Meteo France, NOOA, ECMWF, Bracknell etc. But lately I have been looking more in-depth at the French model, AROME, the successor of the equally valid ARPEGE.

I usually issue a weather forecast from Portosole in the evenings, the METEOCOST for the Ligurian Rivieras, the Cote d’Azure and the tract of sea that divides us from Corsica, which is good for the night, the next day and a trend for 144 hours, meaning six days, with a decreasing level of dependability, I would not go beyond that, as the level of dependability drops dramatically.

I focus a lot on safety at sea, mainly warnings on wind force, the state of the sea and any dangerous phenomena for navigation like thunderstorms, turbulence and fog. Then, other factors that are less important for sailing like the state of the sky, the temperature, visibility and the chance of rain.

What is your relationship with the sea? How often do you go?

I don’t have any boats at the moment. I only made a 1/10 model of a Riva Aquarama which came out very well. I have been mooring crew at Portosole for nearly forty years with the role of creating the Meteocost. I love the sea, and invite everyone to respect it.

You and I have to go out on a boat. What is the first thing you check to know the weather and sea conditions will be good? What are the “signs” that you read when you look at the sea and sky?

I consult the ARPEGE model for wind force, the LAMMA for wind and sea, I look at a few maps at 12/24/36 hours where you can see the movement of the weather fronts (WETTERZENTRALE). Naturally, then, there is direct observation of the types of clouds, the cirrus and cirrostratus, real announcers of the change in weather. 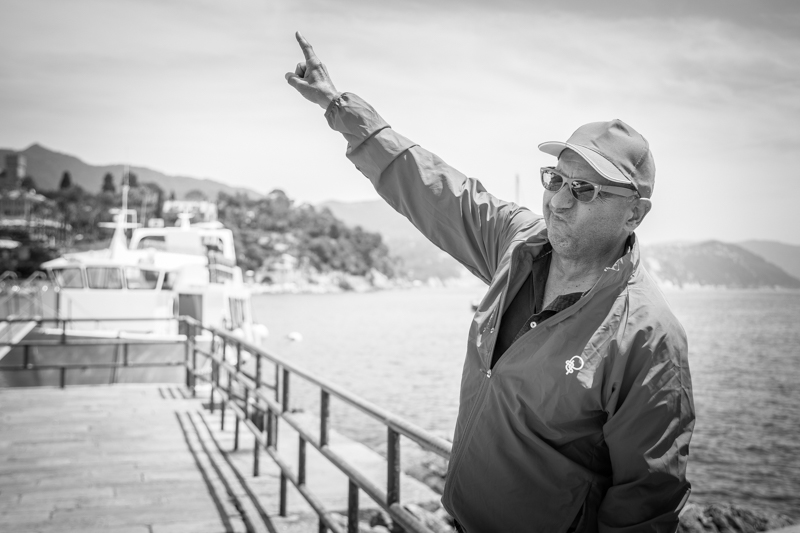 Boating in A Portrait | Martino Motti: “At 9 years old, my grandparents gave me two cameras. I was stunned by that technology and began to photograph everything I saw”

Martino Motti is a journalist and underwater and reportage photographer specialized in yachts and superyachts, who photographs and trials them for several nautical magazines