Boating in a Portrait | Emanuela Baglietto “The sea has always been in my eyes, ever since I was a child. And many of my designs are created on a pier beside the sea.”

The name of the architect, Emanuela Baglietto, is tied to an icon of excellence in Italian boating. Today, she works with the studio of Renzo Piano working on buildings, often overlooking the sea, with the same values transmitted from her family of shipbuilders.

Emanuela Baglietto, with a degree from the faculty of Architecture in the University of Genoa, began working with the Renzo Piano Building Workshop, in Genoa, in 1988. She worked as an architect managing a number of designs and competitions, and became a partner in 1997.

She then became manager for a number of projects built in Europe and the United States, including the Mercedes Design Center in Stuttgart, the Nasher Sculpture Center in Dallas, the expansion of the Isabella Stewart Gardner Museum in Boston, the Astrup Fearnley Museum in Oslo and the Centro Botin in Santander.  Currently she is working in the construction of residential tower blocks in Sydney, the Istanbul Modern Museum in Turkey and the design of buildings planned in Auckland for the 36th edition of the America’s Cup, for the Italian sponsors of Luna Rossa.

Her name is tied to that of a family which has become an icon of boating excellence in Italy, like the prestigious shipyard, Cantieri Baglietto. In the last few years, after nearly thirty years working only for architecture, she began focusing in the history of Cantieri Baglietto, which have belonged to the family since 1983. She organised an exhibit entitled, “Baglietto, a dream on the sea.”

Ms. Baglietto, Cantieri Baglietto have become an icon for the Italian boating industry. What are your family memories tied to the business?

I spent my childhood in Varazze, the 60s, when the boats designed by may father, Pietro, were riding the waves of the economic boom, and rose to the top of Italian markets and beyond with the famous Ischia and Minorca purchased by famous people like Aga Khan and Peter Sellers.

At home, however, we did not celebrate the success and in particular I knew very little of what was going on at the shipyard: I enjoyed the shipyard, but mostly through the names of famous people that were mentioned, like “Milan”, Giorgio “u Pua”, Andrea “il Ciocco” and “Scimun” who, mentioned continually for what they had and hadn’t done, becoming a part of the family talks. At home we spoke about how fast the boat that had just been launched had gone, or if it had heeled over.

My father worked on motor yachts, to test them, and he brought my mother and some friends on board in the summer (children were strictly left at home), making them go even when the sea was rough and the wind was strong in order to test the engines and test the planing of his hulls with the wing keels, making everyone seasick as a result.

The only event that the children were allowed to participate in was the launch of vessels for the Navy, which happened in pomp and circumstance in the port of Varazze, with all the local authorities, including the bishop, and the emotional godmother, who more often than not was a war widow. But, we all went to the Salone Nautico in Genoa every year: I loved walking around the hulls of the boats and proudly guided the visits on board, supported by the sailors who knew how to answer visitor questions.

In the 70s, I began to better understand the huge reach that Baglietto boats had. I began sailing when I was young with my father, I used to do regattas with him around Liguria first, then around the Mediterranean, and in the ports I would often see yachts that were 18, 20 and 16.50 metres long and those that weren’t, looked a lot like them. Baglietto boats had become an icon of nautical design and a point of reference for many other shipyards.

Why did you decide to focus on architecture?

When I finished secondary school, I thought studying Naval Engineering was too difficult for me, as I wasn’t very good with numbers. Architecture seemed like a good choice, because it is a faculty that unites the human, social and technical aspects into a science that has distinguished humans since the beginning of time.

I thought that I would then have learned the technical aspect later, in the field, but I was wrong. Indeed, shortly after, things in the shipyard began to take a downward turn with the oil crisis in the 80s. The available money was reinvested and clients were increasingly rare. There were only the military commissions left. Then, after a few years of hard work, the family stepped away.

At that point I had graduated and had sadly renounced going to the United States to complete a Master’s Degree. I had, however, through partners of Renzo Piano, who head-hunted in the universities, begun helping out in the studio which was in Piazza San Matteo at the time. I was called for final delivery of the design, when they needed willing helpers. From here came the spark that led me to embracing and loving this profession, in which I am able to enjoy myself and achieve great results. Obviously not without working hard.

Today, what is your relationship like with boating and the sea?

The sea has always been in my eyes, ever since I was a child, and it continues to be there even through the large windows of my office. I have always loved sailing and, even though I had to give up a large part of my sporting activities to dedicate most of my time to architecture, I was able to also work in the boating industry. In the early 2000s I refitted the Chato, a very fast 26 metre motor yacht in aluminium that my father had built for one of his repeat clients, Baron Von Neumann.

Then, with Renzo Piano, in 2003, I worked in the design and construction of his 60’ sail boat, Kirribilli I, which now belongs to a Norwegian entrepreneur who was our client for the museum in Oslo. In the summer the boat is docked in front of the museum.

In 2006, I was then manager for the design for the base of operations for Luna Rossa with the Prada team for the America’s Cup in Valencia. It must have gone well, because they called us back and now I am working on the design of temporary and permanent structures, for the events of the 36th edition of the Cup in Auckland, sponsored by the Italian team of Luna Rossa. In one way or another I always manage to work in something tied to boating and many of my designs are created on a pier in the sea.

You organised an exhibit entitled, “Baglietto, a dream on the sea.” What was the “dream on the sea” for your father, who expressed it so well with his yachts?

I believe that my father’s dream was to apply to his boats his theories on the studies of planing keels which he developed throughout his life: making fast yet light boats on the water, innovative boats also in terms of topside and superstructure, breaking from traditional canons, modern, in step with the times he was living in.  Previously his ancestors, his father Bernardo with his brother Vincenzo Vittorio, had begun taking this path, building racing boats and war boats that were very fast and high performing, but also very elegant.

In the 60s, in a time of great social and economic change, the Fiat 500 had just come out and the first Boeing 747 was about to take off, even boating technology was undergoing a revolution with the introduction of waterproof plywood. In the shipyard, the use of this material, together with the new ideas in serial production for motor yachts, led to significant morphological changes both in the keel and superstructure.

And so the dream of uniting technology innovation and elegance of shape, led to the creation of the beautiful Island series with completely new lines and pastel colours and then, in the 70s, to the metric series which were certainly more angular and minimalist, as was fashionable at the time. In short, experimentation, innovation and the search for harmony in the shape were the essence of my father’s dream, inherited through the DNA of his ancestors.

Now you create “dreams” on land, as a partner to the famous architect Renzo Piano. What are the values from Cantieri Baglietto that you still apply to your work?

The difference between boats and buildings is that buildings don’t move. If they are built wrong they stay that way forever, or at least until they are demolished. The responsibility of creating a building is also a social responsibility, you can’t just dream it up, there are thousand of rules and it is all quite complicated.

But the values in my DNA are the same: experimentation and innovation are part of my design process and I consider myself to be very lucky because I am among the few who can do it. Care in the harmony of shape is the same. We also add to those requirements lightness, which, though it is of an intrinsic nature to anything that floats, needs to be invented for anything fixed to the ground.

Nowadays, buildings need to have good performance, like my father’s boats needed to be. But in the sense of being sustainable and using clean energy systems like geothermic, solar, and wind energy and innovative materials according to the needs of of my time. 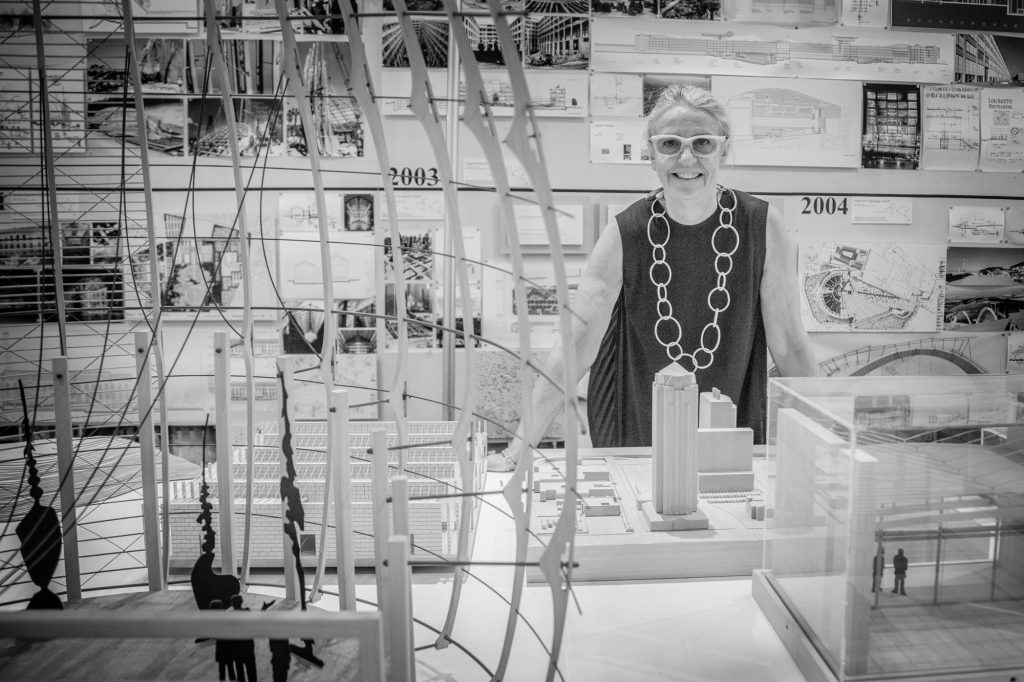