Boating in a Portrait | Fabio Pozzo “The sea is a way of living, a state of being, not just a view”

Fabio Pozzo, journalist for La Stampa, has had the honour of bringing to a newspaper an entire page, and to the web, a channel, dedicated to the sea. At the heart are always the stories, protagonists, and passion.

Fabio Pozzo is a journalist for La Stampa. He worked in current events, economy and finance, and worked in the head editor’s office. He created and coordinates the Mare [Sea] channel for the website lastampa.it. He follows topics tied to the sea, from shipping to history of navigation, from boating to sailing, the great regattas, trips around the world like the Volvo Ocean Race and the Vendée Globe, as well as the America’s Cup.

He worked on board the transatlantic ship Galileo Galilei (Ici/Chandris) and the Swedish ferry Drotten (Miura Line) and sailed on the aircraft carrier Cavour as well as the schooling ship, Amerigo Vespucci. He was the 18th man of Mascalzone Latino in the semi-final against Team New Zealand in the Louis Vuitton Trophy Dubai 2010, the last regatta of the Iacc class. He was the 6th man on board the Ac45 Artemis for the speed test at the America’s Cup World Series in Cascais 2011, and again 6th man for Luna Rossa in the fleet regatta of the Ac World Series in Naples 2012. He competed with Abu Dhabi in the Abu Dhabi practice race and with Groupama in the pro-am race in Galway for the Volvo Ocean Race 2011/12. He was competing on board the maxis IdeaSai, Ourdream, Grande Orazio, Farewell, Viriella, Ancilla Domini. And more, on the Swan 70 Flying Dragon, the Cookson 50 Mascalzone Latino.

Fabio Pozzo is also co-author of a number of books including, “Assolvete l’Andrea Doria”, “I colori dell’oceano”, “Ho sposato l’oceano” and “Odiavo i velisti” with Cino Ricci, all published by Longanesi. He has received a number of literary awards and in June 2019 he was awarded, for the category of Italian Journalists, with the “Premio Pionieri della Nautica”, founded by Ucina Confindustria Nautica in 1988.

Fabio Pozzo, how did you first come into contact with boating?

An uncle who was a sailor and worked in shipping. It was his stories that fired up my imagination as a child and allowed me to see beyond the horizon. From here came my idea to go to the Nautical Institute in Trieste, a city which added some blue to my identity which already identified itself with that colour. I was born in Recco, and lived in a number of other cities around Italy, but always near the sea. It was an easy step, with all this background, to work in boating. In Trieste I learned to sail, began hanging out in the boating environments, and admired the beautiful boats.

For 16 years you worked in current events for the well known Turin newspaper, La Stampa. Then came your first articles tied to the sea and shipping, through to the foundation of a dedicated Sea channel on the La Stampa site, always full of information. What was it like to bring the sea into the newsroom of a huge national newspaper, in a city far from the sea?

I have always cultivated my passion for the sea even in my profession, in parallel with the other jobs I did for the newspaper. I began to write about the sea, and with that I mean sailing, boating, and history of navigation, in Liguria, then moved on to Turin, where I came up with the idea for the Mare channel and a dedicated page on the paper version, this one sadly being only seasonal. It isn’t easy to convert a general newspaper blue, I don’t think it is easy in any form of media, unless they are specialised. More of a reason to try.

What is your approach to tell tales of the sea and boating to readers of a national newspaper, not specialised in this sector, who, for the most part live far from the sea?

I am convinced that the sea and boating can be shared through beautiful stories. And the stories almost always have a man or woman at their heart. I think this is the way to bring the sea and boating to the forefront: telling them through their protagonists. Boating, for example, is an economic sector that naturally needs to balance itself with people’s budgets, but it is a great anthology of passion. There is a lot of heart behind a boat. There is a lot of inspiration, dedication, intuition, sacrifice and emotion. All you need to do is take part in a launch to understand that. The challenge is being able to transmit this world, in the right way, also to those who don’t live it or know it.

What do you remember from your experiences when you were on board the Vespucci and Cavour?

The desire for adventure, during the summer holidays in the early years at the Nautical Institute, with a role as a cabin boy and official apprentice on deck (meaning that I was on the bridge to learn the profession) on one of the last transatlantic, the Galileo Galilei. The desire for freedom, during the following embarkation between the end of secondary school and the beginning of university on the Swedish ferry that ran between Genoa and Barcelona, working as a sort of officer in training and official apprentice on deck.

And then the privilege of living, even for a short time, on the Vespucci, when I was on board and sailed during a special partnership between La Stampa and the schooling ship during the campaign that brought it back to America, as well as the opportunity on board the Cavour, which gave me the chance to experiment night navigation on a large military vessel, “grey” as they say in the Navy, these all confirmed that the sea was my passion. I shared a lot of that on board these ships.

You have also competed on board a number of ships, some of the most important in the field. What are your sailing skills? Where did you learn?

No skills. Almost all the regattas I took part in, of a high level, had me in the role of ballast. I limited myself, and could not have done otherwise by regulations, to be a counterweight. Maybe I could compete as the Italian ballast with the most titles.

Outside of your job, what is your relationship with the sea and how often do you go?

I don’t have boats. Some people say it is better to go on board other people’s. In Genoa I live on the sea, which I can see from my window at home and which I look out over any time I can. In Turin I bring it with me: I talk about it, I think about it, I write about it, I feed a network of sea lovers, I am dressed in blue. The sea is a way of living, a state of being, not just a view.

How do you think you can promote sea culture, in addition to the media?

Italy does not know the sea and does not cultivate its culture, differently from other countries who like ours are bathed by the Mediterranean, rather than the oceans. There are regions, cities that are more blue than others, naturally, but in general, for many it is still that dark thing that moves even at night and never stops. Which is scary and is sometimes enjoyed only in the summer. And yet the sea is there also in the winter.

Digressions aside, I believe that the sea should be shared whenever and wherever possible, in order to help people learn about it. With meetings, books, films. In Genoa, for example, we are doing this through “Incontri in blu” at the Galata Museo del Mare, an exhibit supported by Mu.ma, the promotional association for the Sea Museums, and other institutes including, Ucina, Yacht Club Italiano, and Federvela, and which will close its first cycle on 19 September, the opening day for the Salone Nautico, with special guest, Norberto Ferretti, founder of the group bearing his name which made boating history.

An event which will return in 2020, always sharing stories of the sea through its protagonists, men and women who are closely tied to it. This year we have told the stories of surfers, free divers, sailors, shipping managers and even princes of islands who have become independent states. A story for more hearts, because in the end, what comes out, beyond their extraordinary stories is a story of love. 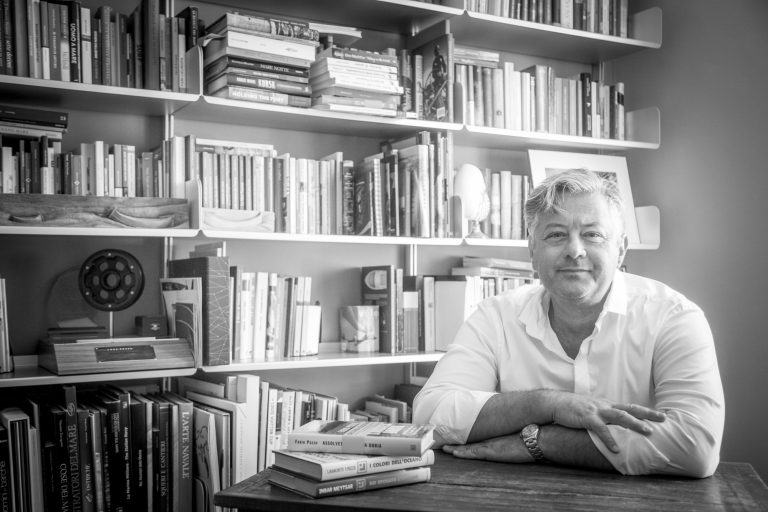