Boating in a Portrait | Giovanni Novi “That night that, at the Yacht Club, we turned on the lights in the municipal hall in Sydney just like Marconi.”

A man of finance, promoter of sailing among young people, so much so that he founded the Sail Training Association and organises regattas and gatherings, Giovanni Novi talks about his relationship with the sea and with sailing, on board the Chaplin, the family yacht donated to the Navy.

Giovanni Giulio Novi, born in 1935, born and currently residing in Genoa. After a couple of years in London as a broker, he returned to the Superba to found, together with his friend, Enrico Burke, the company Burke e Novi, which soon cemented itself at a worldwide level in transportation with tankers, dry cargo and naval buying and selling activities.

In 1967, his younger brother, Franco, also became a part of the business, and in 1987 and 1988 he took on the chairmanship of the Federazione Internazionale Agenti e Brokers Marittimi (FONASBA), and from 1992 to 1996, he was president of  Federagenti. In the Eighties, Novi added to his business portfolio international commerce of metal and raw materials.

From 1987 to 1997, he was president of Yacht Club Italiano. Together with Admiral Angelo Mariani, Chief of Staff for the Italian Navy, he also founded the  Sail Training Association – Italia, which he chaired until 2003. He was then executive vice president of Sail Training International, based in the United Kingdom and successfully organised a number of gatherings of Tall Ships, including the one in Genoa in 1992 (the “Columbus Race”).

His wife Nucci Novi Cappellina was a great sailor and the first female president of the Federazione Internazionale della Vela, for three consecutive mandates. Their family yacht, the Chaplin, a wooden vessel built by Sangermini based on a design by Carlo Sciarrelli, was donated to the Navy, which still uses it today to participate in regattas and events.

President Novi, you started with a minimal capital, with only five employees, and created a business that was to become one of the most important in the world in the brokerage sector. Do you feel you are a man of finance or of the sea?

Without a doubt more a man of the sea, even though I worked with finance through the many ownership transactions I took part in.

The foundation of the Sailing Training Association  and the vice presidency of Sailing Training International, as well as the organisation of the various Tall Ships events, led to you bringing sailing throughout the world, introducing it especially to young people. Which countries were most satisfying in that respect?

Sail Training International, with head offices based in Portsmouth, of which I was president for many years, until 2006, and Sail Training Association Italia, of which I was president and co-founder together with Chief of Staff of the Navy, Admiral Angelo Mariani, are two well known institutes at an international level, inasmuch as they promote sailing experiences to young people who would otherwise not have the opportunity.

And every year they organise regattas and gatherings around the world, mainly in Europe. A number of times I managed the event in a number of ports: Genoa, Naples, Cadiz, Amsterdam, Stockholm and others. These events see the participation of schooling ships from the different navies as well as other foundations. The base rule is that the crew must be made up of at least 50% of young people under the age of 25.

You were also president of Yacht Club Italiano. What are your memories of this time?

I have a number of memories from my period as president of YCI, which was 10 years long, from 1987 to 1997. The two most significant events in that period were the Columbus Race, which left from Genoa in May 1992 and reached Liverpool, through two tracts in the Atlantic in August of the same year. Over 5 thousand young people took part in that regatta.

The second event that I remember as a singular episode was when in honour of 100 years of RAI, in repeating the feat of Guglielmo Marconi who from the marina of “Duca degli Abruzzi”, via radio in 1933, turned the lights on in the Municipal Hall in Sydney. We repeated the event with the sailing ship “Croce del Sud”, in place of the “Elettra”, which is no longer around. Giving the signal to turn the lights of the Opera House in Sydney back on was the President of the Republic, Oscar Luigi Scalfaro.

Your wife, Nucci, was an excellent sailor and president of Federvela internazionale. Both of you have covered important roles for sailing in the world. What are your memories in regatta together with your wife?

In the 38 year period in which I participated in regattas with my wife, I remember our victory at the Settimana delle Bocche di Bonifacio in 1977, of the Giraglia in 1988, and the Mediterranean championship in 1992, of the Vele d’Epoca in 2003, and many more. My wife was an expert sailor, when she died she had already been vice president of Federazione Internazionale Vela for two mandates.

As a “patron” of sailing you donated the Chaplin, a splendid Sangermani, to the Navy who still use it today to compete with students of the naval Academy. When and how did it become your family yacht?

Before my wife died we gifted our family boat, the Chaplin, to the Navy. We were always happy we had done that, knowing that the Navy would have used it and maintained this now antique vessel better than we could.

Who was the real captain on board the Chaplin? You or your wife? 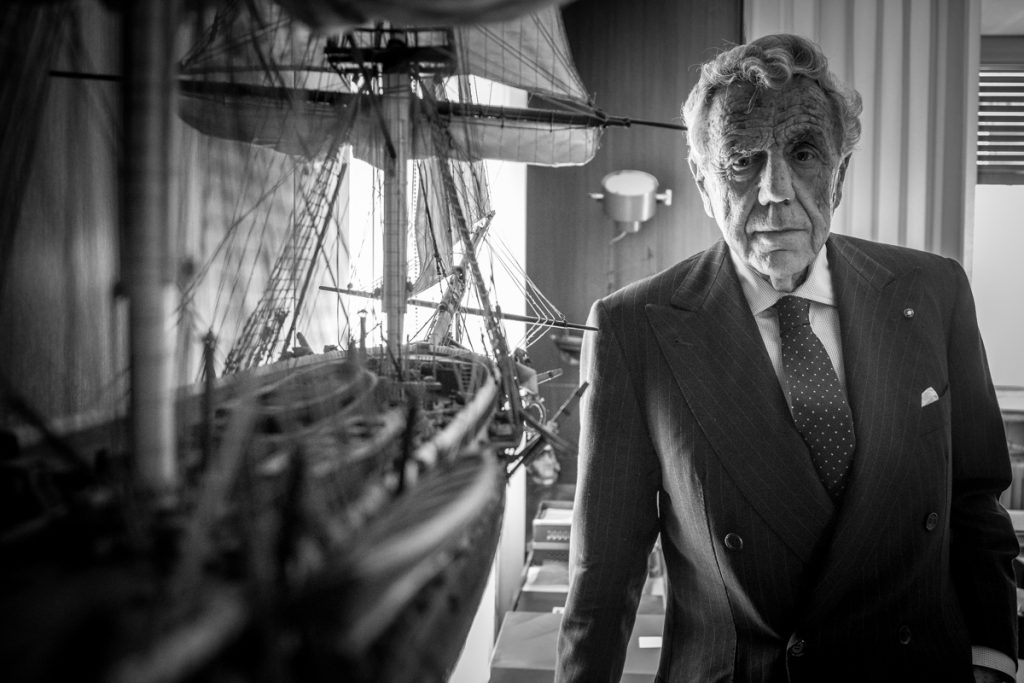