Boating in a Portrait | Maurizio Bulleri “Put the cuffs down! Whether it is a dinghy or a 6-metre yacht I want to share my passion and desire for sailing”

Former motorboat champion and now the face of “The Boat Show”, Maurizio Bulleri tests the most beautiful boats in the world. On YouTube over 50 million people have seen his videos and his channel has over 130 thousand subscribers

Maurizio Bulleri, born in Genova in 1961, is a journalist specialising in boating, and is the public face of “The Boat Show”. His first encounter with boating happened at the age of 14, during a trip by dinghy from Genova to San Fruttuoso di Camogli.

At 18, he got his nautical licence, then with his first wages, his first boat, a 4-metre open with 40 horsepower, a little bigger than a bath tub. After a brief excursion in the rallies as a navigator for Scuderia Grifone (winner of the Rally della Lanterna – Group A – in 1985), in 1989, a 28 years old, he united his passion for the sea with that for speed and entered his first motorboat race.

From then on through to 2006, he competed in 17 uninterrupted years of competitions in Italy and abroad, winning 7 Italian championships, two European titles and the World Championship in Powerboat P1 in 2005. His most recent challenge was also the riskiest: breaking the speed record from New York – Bermuda in 2012, 700 miles speeding along in the Atlantic ocean. Accidents? Many, but the only time I risked my life, I was in a dinghy taking photos.

His encounter with journalism took place in 1998, when he began working with a number of boating magazines, testing and reviewing boats of all sizes. In 2007, he turned his written reviews into a TV program.

Today, Maurizio Bulleri pilots boats of all kinds and sizes and talks about them on “The Boat Show,” airing on Sky Sport Arena for 9 years, every Thursday evening in prime time. The program is aired around the world and translated into eight different languages. On YouTube over 50 million people have seen his videos and his channel has over 130 thousand subscribers. In his free time, Bulleri, loves walking through the historical centre of Genova and sailing, anywhere in the world.

Maurizio Bulleri, how do you prepare yourself to test a craft or a mega yacht in front of a camera and present it to your viewers?

Whatever the size of the boat, I try and embrace its essence, the reasons behind the origin of its design, I inform myself on the methods and materials used in its construction because these are fundamental, then I study its engine and propulsion and calculate what its performance could be.  When I get on board, though, I often go off-script, what I imagined is no longer useful, what counts is the feeling I have. I am not an actor, I’m a hobbyist, a former pilot and what I genuinely feel is what I express. You can clearly see what I like and what I do not find attractive or functional, or so I have been told.

You have now nearly become a “web star” on social networks; on Instagram there are even gifs dedicated to you and your now famous expression, “Put the cuffs down!” What do viewers and followers mainly ask you when they contact you on social networks?

The first time I recorded an episode, I ended up in Accident & Emergency; I had developed dermatitis from the stress. What do I have to do? What do I have to say? How do I have to say it? I was terribly anxious. My fans and viewers helped me. Finding out that what I was doing made people happy gave me faith in myself. Now they keep asking me to make more videos, there are never enough. I would have liked to modify the format, but they told me to keep on going and especially to always “put the cuffs down”. Many people want to know the costs of the vessels and I am sorry I can’t tell them, but some videos could stay online for years and the prices would then be wrong.

Often, on your program, you showcase yachts that only very few people in the world could afford, for cost and consumption. Does boating also mean making the public dream? Is there a risk that viewers feel too detached from the world that is often shared by the media?

Sometimes I read comments that highlight the economic gap that we are all aware of, but when I look at a boat, I don’t see its owner, but the artisans who made it, I admire their skills because I know just how hard their job is. Boats are extremely complex, they are luxury villas that move across the waves swiftly and knowing how to build them is a rare gift. All of the people involved in creating it have an important role, from the person working the fibre glass to the one making the furniture, or propulsion, or electrical wiring, not to mention those that, moved by passion rather than trying to make easy money, decide to open their own shipyard. So, if I think about all of this, I am not envious of the riches but admire the work of skilled people, just like I would admire a masterpiece by an artist.

You know well both those who make and use vessels, from boats to luxury crafts. What advice would you give boat makers to ensure that the number of pleasure boaters continues to grow?

For me, the driver for any development is passion. It is clear that you need to have the financial resources necessary to buy and manage a vessel, but I can ensure you that I have more fun on a 6 metre dinghy with a 40 horsepower engine than on a mega yacht. I spoke about fun in the pure sense of the word and I can’t deny the pleasure of luxury, but it is something else entirely. A small boat with a small engine, used but well kept, costs the same as a middle range car. A luxury yacht is like a villa in a fashionable neighbourhood. In short, there are a number of people who have the resources to buy a boat and even more who could hire one for holidays, but they decide to spend their savings in another way. Why? Because many of them don’t know what it means to go on a cruise with their own boat, swim in crystal clear water, prepare a meal in the middle of the sea, maybe using fish they have just caught, water skiing, sleeping in roadstead rocked by the waves. All of this is also possible on a dinghy of 6, 7, or 8 metres, no longer. This is what is missing, the experiences that help fuel a passion. We need to work to inspire people to go sailing at any level.

Outside of your job, what is your relationship with the sea and how often do you go?

As in life, I have also gone through different phases with the sea. Every thing has its time and leaves its mark. I was pleasure boating with small craft then dinghies and I always enjoy close contact with the water, the excitement of feeling the waves, the pleasure in following them, facing them, and surpassing them, which you feel even more strongly with smaller boats. But my passion for speed has remained and I would like a boat which will take me to 100 knots whenever I feel like it. But, if I could manage my life with no obligations, then I would buy a displacement boat and travel the world, taking my time, but sailing every day, living on board,

BOATING IN A PORTRAIT A project by Liguria Nautica and Claudio Colombo showcasing a gallery of Ligurian people or those who have ties with our region, who have left their mark on Italian boating, or who have deep rooted connections with our sea.  For each of them, we present a photographic portrait take by Claudio Colombo and an interview with our journalist, Giuseppe Orrù, to better know each person, in their personal lives as well. 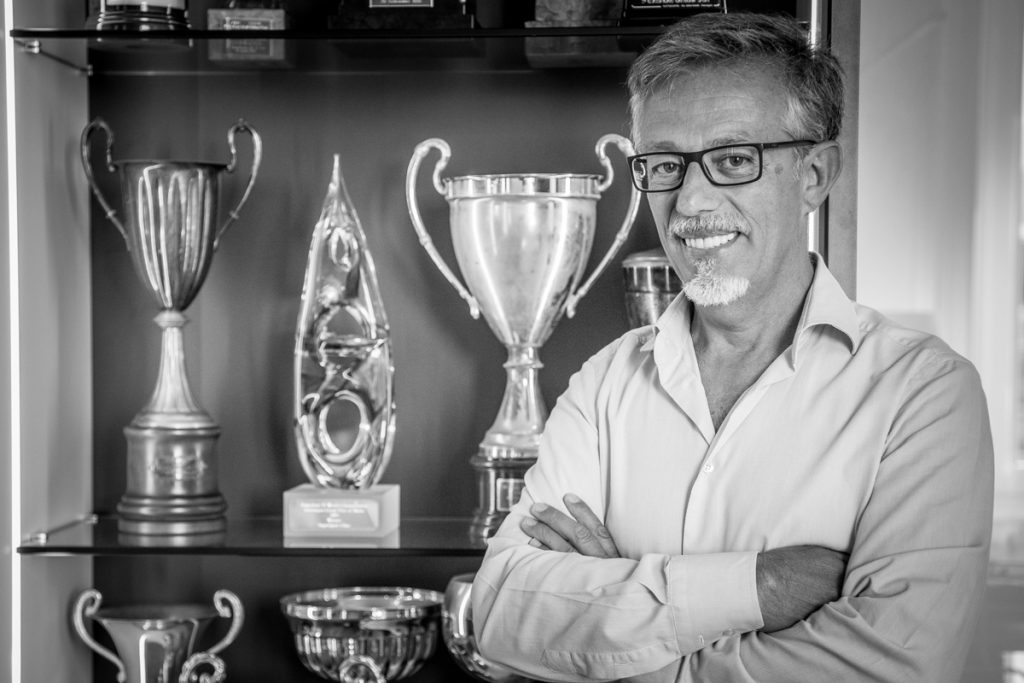