A panoramic hike from Rapallo to the Santuario di Caravaggio, in order to admire the splendid views of the Ligurian coast: from the Tigullio area to Spezia, Genova and Savona. A three-hundred-sixty-degree view overlooking the marvels of our sea. We depart from Rapallo (the precise location is Santa Maria), then go up to the Santuario (a little over 600 metres above sea level) then come down through Ruta, a part of Camogli.

As a point of reference we are using the restaurant “I Tre Ulivi” in Santa Maria in Via San Tomaso, from here, our excursion from Rapallo to the Santuario della Madonna di Caravaggio begins. Behind the restaurant there is a road that after a hundred metres meets with a stone staircase. From here we reach the Ruderi di San Tomaso, these are the ruins of an old sacred building: a wall in stone, a column and some capitals supporting some arches.

We continue to the right on the trail winding up through the farm houses and cultivated terraces, the trail meets with the road a number of times, but we continue straight on without deviating. After about thirty minutes from departure, we reach Spotà.

On the left is a new staircase leading to the final tract of paved road, after ten minutes, we reach a crossroads: both trails will work, but we suggest taking the one on the left. It is easier, better marked and passes in front of the Croce di Spotà, a monumental cross erected in 1935 in honour of the fallen in World War I.

Going up the trail now is easier and rewards us with a splendid view of the valley below. After an hour and a half, our hike from Rapallo to Santuario di Caravaggio is about to end. After passing the helipad, the only other way to reach the sanctuary, we began going up the one-hundred-thirty-six steps separating us from our destination. Now the excursion from Rapallo to the Santuario della Madonna di Caravaggio is done: it was difficult, but the fantastic view repays all the effort. The view opens up over the Tigullio Gulf and over La Spezia to the east and Genova and Savona to the west. 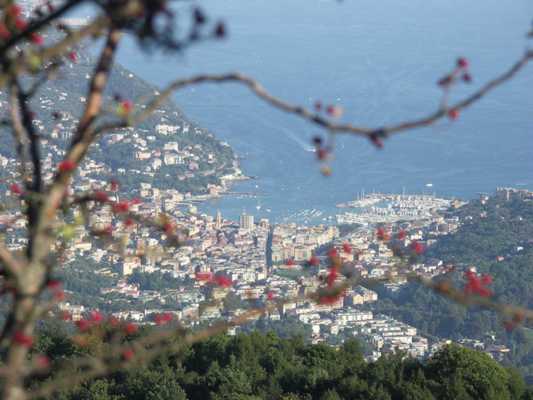 To go back, we walk past the helipad and take the road to the right, then continue on to the left. At this point there are two options: follow the traditional trail, or make a detour to enjoy an even more panoramic area. This is a longer route, which reconnects after twenty minutes with the main road.  You then go down the hill to the Chiesa Millenaria in Ruta di Camogli, from here we took the bus to return tour starting point.

We recommend beginning the excursion from Rapallo to Santuario di Caravaggio after having had a hearty breakfast. We suggest bringing a packed lunch (panini, focaccia etc…) to enjoy in one of the many picnic areas along the way.

Remember to check the bus times, and purchase tickets ahead of time. An itinerary which is still “fashionable” and with a beautiful landscape: one to enjoy