Liguria Nautica went on hike for you between Portofino-San Fruttuoso: this is our experience Two beautiful areas, known throughout the world. A hike with a magnificent view, perfect for anyone who enjoys walking and discovering the beauty of our land: Liguria Nautica decided to write about this incredible experience.

The departure for the Portofino-San Fruttuoso hike is a short distance from the Piazzetta of this splendid Ligurian town, near the bus stop. Considering that just walking in one direction takes about an hour and fifty minutes, going at a steady pace, we suggest leaving at around 9am.

The best time for this type of hike is May-June: it is not too hot and the weather is more stable, unlike in early spring. It is not a particularly difficult hike, but is good for those who are used to going on hikes, as it is quite long.

The Portofino-San Fruttuoso hike can now begin. Departure is a short distance from the parish church, where we took a mule track rising up alongside the bay: the views are stunning. We passed Hotel Splendido and the area of San Sebastiano, then continued to a crossroads where we briefly left the path for San Fruttuoso. We walked to the area of Olmi, about 280 metres above sea level, a took a path that, after an uphill start, slowly flattened out: it had been about 50 minutes since we started. We hiked up to 450 metres, and found ourselves at Bocche di San Lorenzo and shortly after that, Pietre Strette. 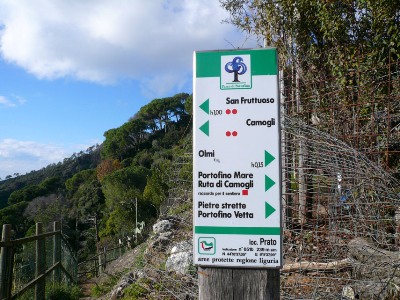 We were half-way through the hike. Having reached this point, the path is fairly simple: we turned left along a wide trail that is easy to walk along and, after a long while, we started going down into a valley between a woodland and some abandoned terraced farmland: at the end of the hill we could see Torre Doria and reached the cove of San Fruttuoso. Having reached our destination, we took a break and visited the abbey.

From here we continued along the marked trail that follows the coastline to return to Portofino: the views along the way were truly stunning. We reached Base 0, an emplacement from the Second World War on a cliff overlooking the sea, after about twenty minutes, we had reached the houses of Prato and the crossroads for Valle Olmi. We then continued on with the trails we took on the way in: having reached our starting point, the Portofino-San Fruttuoso hike came to a close.

We recommend having a large breakfast two hours before beginning the Portofino-San Fruttuoso hike. Don’t forget to bring water and a snack to eat during the hike. For lunch, the ideal meal would be a sandwich and some salad.

To get to Portofino we suggest taking the bus, seeing the high costs for parking. The closest stop is in Santa Margherita Ligure.