Liguria Nautica » Tales from the Sea » On the seafloor off Rhode Island the remains of the HMS Endeavour have been found, the brigantine commanded by Captain James Cook

On the seafloor off Rhode Island the remains of the HMS Endeavour have been found, the brigantine commanded by Captain James Cook The long hunt for the wreckage of the HMS Endeavour seems to have come to a close. After two years of research, the team of underwater archaeologists from the Royal Australian Navy have marked out the possible areas for the sunken ship around a location a few miles from the coast of the American state of Rhode Island.

The expedition, which launched in September from Newport Harbour, a port town located between Boston and New York, was led by an important member of the Australian Navy, the vice admiral, Michael Noonan, who wanted to personally dive down to the shipwreck and verify that the remains of the cannons corresponded with archaeological expectations. At the end of the inspection the admiral held a press conference in which he announced that the shipwreck could truly be that of the European ship which first landed in his country: Australia.

An equally glorious and unlucky story is that of the HMS Endeavour. A reminder that “HMS” are the initial used by all British or Commonwealth ships, and means His/Her Majesty’s Ship. Launched in 1764 as a simple cargo ship for the transportation of coal, the Endeavour was purchased 4 years later by the Royal Navy who transformed her into an agile brigantine and then entrusted her to Captain James Cook whose mission was to explore the southern seas in search of a mythological continent, to discover if it truly existed or not: Terra Australis Incognita.

Cook filled the Endeavour with scientists and adventurers, and in August 1768 departed from the English port of Plymouth to sail off on the biggest adventure that man or sailor could imagine: the exploration of unknown lands and seas. With his ship, Cook went around Cape Horn and landed in Tahiti to allow his astronomers to observe the passage of Venus in front of the Sun and allow them, for the first time in the history of humanity, to calculate the size of our solar system.

Then the Endeavour turned to the uncharted seas of the Pacific and planted Her Majesty’s flag in the golden sands of Bora Bora, Raiuatea and Huahine. After having circled New Zealand, the Endeavour dropped anchor in Botany Bay, and became the first European ship to land on what would no longer be called Terra Australis Incognita, but just the continent of Australia. 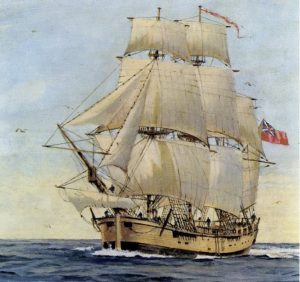 A long voyage through typhoons and hidden dangers, then only partially known, like great barrier reefs, had badly damaged the ship. When Cook was able to reach the port of Batavia – now Jakarta – in the Dutch Indies, navigating from an unknown part of the globe, the Endeavour remained afloat only by the grace of God. Captain Cook had had to order the crew to throw all the cannons into the water in order to keep her afloat.

Having fixed the hull as best he could, Her Majesty’s ship bravely went back out to sea towards the Cape of Good Hope and was able to go around it in March 1771. On 12 July of that same year, on the horizon, the Endeavour saw the white cliffs of Dover. James Cook and his crew had, finally, returned home after having travelled the world and discovered the last unknown continent.

The great adventure had seriously compromised the hull. The Endeavour spent three years forgotten in a shipyard on the Malvina islands and briefly returned to service as a ship for the transport of troops during the American war of Independence. Its own crew sank it in 1778 in order to not let her fall into rebel hands during the attack in Narragansett Bay, in what was then called in history, the Battle of Rhode Island.

The men forgot the place where it sank, but history did not forget about the ship that discovered Australia. A copy can still be visited in the waters of Sydney, anchored in front of the Australian National Maritime Museum, the same which contributed to the rediscovery of the shipwreck. Its name has also travelled to space, written on the fuselage of the Space Shuttle “Endeavour”.