A magnificent outing departing from San Michele (beach of Prelo) and arriving in Zoagli, going through Rapallo

After having admired the areas of Paraggi and Portofino, here is a new outing for readers of LN. This time we are leaving with our kayaks from the beach of Prelo, near San Michele, we will go through Rapallo and reach Zoagli. The sun was shining and warmed us, the beach looked like a blue table: in short, ideal conditions to get our paddles and leave immediately.

This is the best way to admire the splendid colours of the Tigullio, to enjoy the explosion of summer, and to be rocked by the waves of the Ligurian Sea. Everything is ready. Off we go!

The departure is from the Canoa Club di Rapallo, in Prelo (San Michele), this is where we rented our kayak, before heading out in the direction of Rapallo-Zoagli. It will take us about an hour and a half to go and come back, including a twenty-minute break, so we suggest leaving around 10/10.30.

The best period for this kind of excursion is May-June: the water isn’t overly crowded and temperatures are pleasant. We thought about taking a simple route: leaving from the area of San Michele, going through Rapallo and finally, Zoagli. An excursion which is good for those who aren’t used to paddling every day: the effort is limited but the view is truly fantastic.

After ten minutes, we reached the port of Rapallo, having just passed Hotel Excelsior, one of the best known hotels in Tigullio, we could see the cliffs marking the entrance to the marina. We obviously suggest being extremely careful: in July and August there are a number of boats, while on this day we only met with a ferry and a small motorboat.

Our kayak trip from Rapallo to Zoagli is now in full swing. After having paddled past the port area, we decide to make a small deviation and go towards the interior of the Ligurian city. We came in closer to the coast: the bell tower standing out over the nearby houses, the castle rising along the coastal road of Vittorio Veneto and the Rapallo boardwalk filled with tourists. It has been nearly twenty minutes and we head out towards Zoagli.

Nature takes over and the coast shows us its full splendour, we go a bit further out, obviously not too far. The sea is deserted, keeping us company are only a few seagulls, hoping for a few morsels of food. 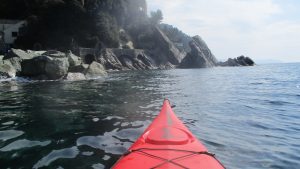 Kayaking Rapallo to Zoagli. View of the Coastline

To our left is the train bridge and underneath it a small beach: we head there and stop. We rest a bit and in the meantime decide to jump into the sea for a refreshing swim. We are about forty minutes into our trip and our excursion is coming to an end.

We start paddling again and it is impossible not to notice the cliffs along the coast, after having reached and passed the point, we finally head towards Zoagli: after ten minutes’ paddling we arrive. On the horizon we can see Chiavari, but for today this is where we end.

We head back and conclude our kayaking trip. It was a pleasant and relaxing voyage and after a little less than an hour and a half we are putting our kayaks back on the rack at the club. We change and think about where to go to eat lunch: it wasn’t a particularly tiring outing but our tummies are beginning to rumble.

We suggest having a hearty breakfast about two hours before your kayak excursion between San Michele, Rapallo and Zoagli.

On the beach of Prelo there is a small café serving panini or salads, or, if you want a proper meal, there are a number of trattorias and pizzerias in Rapallo. Both along the boardwalk and in the town centre there are a number of places: you only have to manage to pick one! Obviously, if you are planning to go back into the water, we recommend having a light lunch.

We recommend getting information from the Canoa Club Rapallo to have all necessary information (info@canoaclubrapallo.it). If you go out accompanied by a member of the association, the excursion is free. To reach the beach of Prelo (San Michele-Rapallo) the best option is to take the bus: the bus stop is only a short distance away.