As we saw in the previous article, there are many writers, sailing experts and “detectives of mystery” that have tried to respond to the question: what could have pushed the crew to abandon the Mary Celeste in the open ocean?

There are those who mentioned the Bermuda Triangle, forgetting that the brigantine had never even been close to Bermuda! Those who suggested kidnapping by aliens. This one is the hardest to prove or disprove. There is the story of the attack from a giant octopus, which ate the entire crew and, as dessert enjoyed the sextant and a lifeboat.

THE SURVIVOR AND THE DIVE INTO THE SEA

In 1913 a diary appeared, written by a certain Abel Fosdyk, who claimed to be a friend of Captain Briggs and told how he had been secretly smuggled on board the Mary Celeste to escape American police. According to Fosdyk this is what happened: Briggs made a bet with the crew that he could swim, fully dressed, and dove into the water to prove his point, preparing beforehand a small stage overlooking the sea so that his wife and the sailors could view his efforts.

The stage collapsed, and a pack of starving sharks took care of the rest, while Fosdyk, the only survivor, was able to save himself by clinging to a beam until he reached the African coast. The most surprising thing is that there were readers who believed this very improbable version of events. Then somebody demonstrated that Abel Fosdyk had never existed and that the news was, as we would call it now fake news, created only to sell a few extra copies of the papers.

Another hypothesis taken into consideration was that of a pirate attack. A plausible hypothesis except for the fact that the cargo – made up of 1701 barrels of alcohol for industrial use headed for the port of Genoa – was found. And, in addition, real pirates would have taken the ship and the sailors’ money.

But what about a mutiny then? Captain Briggs was famous for being an understanding officer and now crew had ever complained about him. The sailors on board the Mary Celeste, in addition, were all faithful and with proven experience. And if that were not enough, on the deck there were no signs of fighting or blood. And then how did they all disappear by taking only one lifeboat, the smallest on the ship? Real mutineers would have taken over the entire ship and become pirates, in order to make money or to find shelter in a safe harbour.

Some have also suggested that the crew could have become victims of ergot, the common name for claviceps purpurea. A sort of fungus that infects bread on board and provokes an intoxication that could lead to hallucinations. In this case, the sailors may have abandoned ship in the throes of who knows what nightmare. A slightly stretched out hypothesis, without taking into consideration the fact that that bread was then eaten by the sailors of the Dei Gratia and they had no ill effects.

And what if someone on the ship suddenly went crazy without any fungus? Even this theory was taken into consideration. The first mate or boatswain goes crazy and kills everyone to then escape on the lifeboat. Shame there is no trace of blood throughout the ship! Not to mention bodies of the victims. The fact that a crazy person could, on his own, kill nearly ten people is not very plausible.

Rather, there are a few considerations to make. The ship was abandoned in haste, yes, but not in a panic, considering that the captain had taken with him the sextant, the cargo documents, and had lowered the lifeboat into the water. He probably thought to come back on board shortly. But why did they remain in the sea once they had escaped the danger? And what led them to abandon ship? A tornado? A tsunami? Any sailor would know that the safest place would be the ship, at least for as long as it remained afloat. And the sailors on the Mary Celeste were all experienced. 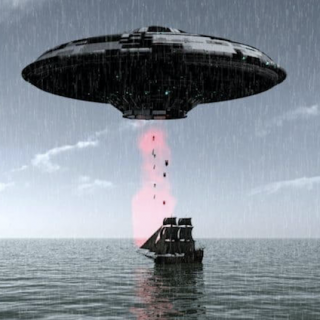 Among the many theories explaining the disappearance of the crew of the Mary Celeste, there is also that of an alien kidnapping

What really happened on board has also been told to us by the ship’s cook, Mr John Pemberton. Captain Briggs, angry because the piano that his wife had wanted to bring on board had not been fixed well to the floor and had come apart, decided to fire the entire crew and ordered the sailors to get into the missing life boat and go on their way. He only kept the cook on board because, evidently Mrs Briggs didn’t like to cook. But it was all a farce, in fact Briggs had made an agreement with his friend Morehouse, captain of the Dei Gratia, to steal the brigantine and split the treasure.

The extraordinary part of this version is that, yet again, some people believed it. Yet the fact that writing it in one of his novels was a writer of adventures, Laurence Keating, and that the cook on the Mary Celeste was actually called Edward Head and that the story was cleared noted as a literary work of fantasy, should have led some people to suspect it wasn’t true! And yet, this version acquired a number of supporters, proving that fake news was around long before the internet!

As we wrote, the Mary Celeste was transporting 1701 barrels of alcohol for industrial use. Yet when the Authorities of Gibraltar investigated the hold, nine of these were found to be completely empty. Where was the alcohol inside them? Could this be a part of the answer to the mystery? Let’s discard the possibility that they all got drunk. The industrial alcohol in question was destined to “fire up” Italian wine (does that seem strange? Yet at this time this barbaric practice was frequent) but like that, on its own, it cannot cause drunkenness. It could cause, at the most, stomach pains, but not drunkenness.

Another strange thing to consider is that the empty barrels were only those made in red oak, while the others, made from white oak, were still full. An English historian, Conrad Byers, knowing that red oak is particularly porous and does not keep in vapours, theorised that these had scared, rather than made drunk, the captain and his crew. Briggs had never transported items that were so dangerous and inflammable. He had even mentioned it, worried, to his friend Morehouse during that dinner that they had had in New York before departing.

Alcohol vapour is extremely flammable and even just a spark can cause a violent explosion. But how can we explain that on the Mary Celeste there were no signs of burning? In 2005, a team of technicians from the University of London recreated a scale model of the Mary Celeste, sealing the cargo hold after having introduced butane and other combustibles. They then set off the explosion. Ethanol burns at a very low temperature, its explosion is violent, but, as demonstrated by the experiment, it burns out quickly and does not leave marks on the wood.

This is therefore a possible explanation. The vapours rising from the cargo suddenly caught fire, Captain Briggs ordered everyone to abandon ship, taking only the sextant and important documents. In the rush, someone could have damaged the compass in an attempt to bring it along. Then, the entire crew got into the lifeboat. The smallest and easiest to put into the sea. They probably didn’t intend to definitively abandon the vessel. The explosion had already quickly burnt out, and the captain only wanted to be sure that the whole ship wouldn’t explode, in case the fire had affected the rest of the cargo.

He had probably fastened the lifeboat to the Mary Celeste with a lanyard. And indeed, a line hanging from the parapet had been found by the sailors of the Dei Gratia when they stepped on board the brigantine. What happened afterwards though, we can only guess. Certainly the ship did not explode, but the sea could have become stormy a broken the lanyard. The wind pushed the ship which still had the smaller sails unfurled. The lifeboat, with on board the captain, his family, and all his sailors, remained alone in the ocean, floating towards a tragic destiny. The Mystery of the Mary Celeste. Part Three: the Rediscovery of the Cursed Ship The Philadelphia Experiment: the Ship that Passed the Confines Between Space and Time

Legend tells of the destroyer, the USS Eldridge which suddenly disappeared from the port of Philadelphia to reappear in Norfolk in a flash of green light