Articolo di Liguria Nautica
Liguria Nautica » Tales from the Sea » The Philadelphia Experiment: the Ship that Passed the Confines Between Space and Time

The Philadelphia Experiment: the Ship that Passed the Confines Between Space and Time

Legend tells of the destroyer, the USS Eldridge which suddenly disappeared from the port of Philadelphia to reappear in Norfolk in a flash of green light

On 28 October 1943, at exactly 17:15, the destroyer from the United States Navy, Eldridge, at anchor in the port of Philadelphia, disappeared under a flash of green light. A few minutes later, the warship reappeared in the waters in front of Norfolk, 500 kilometres further north. It then, once again, disappeared, returning to Philadelphia, in the same exact spot from whence it vanished.

The – real – story of the American destroyer, Tulsa, invisible to radar thanks to stealth technology which we shared in this article in Liguria Nautica, could not but bring back to mind the fantastic legend of the Eldridge. The ship where two scientists of the calibre of Albert Einstein and Nikola Tesla, had, in great secret, experimented tele-transportation.

Science fiction? Also. The legend of the destroyer that for a few minutes travelled through space and time, was too enticing for lovers of the mystery genre, and it was taken up by a number of Hollywood films, among which the most famous was “The Philadelphia Experiment” directed by Stewart Raffill (1984), which was such a box office hit that nine years later, a sequel was made: “The Philadelphia Experiment 2”.

Without including books that are well known by enthusiasts like “Thin air” by George E. Simpson and Neal R. Burger, “Invisible horizons: true mysteries of the sea” by Vincent Gaddis or “Without a Trace” by Charles Berlitz, an author who is well-known for his book on the Bermuda Triangle. There is also an avalanche of comics among which we need to mention one of our favourites, the archaeologist of the impossible Martin Mystere, whose adventures are published by Bonelli, and which picks up the story in some of its comic books like “Sulle tracce dell’invisibile – Tracking the Invisible”.

But what is real in the legend of the Eldridge? It all began with a strange character, who really existed, by the name of Morris K. Jessup. A strange mix of scientist with no degree and staunch ufologist. Jessup spent his time looking for UFOs to catalogue the aliens within and fighting with NASA declaring, on homemade pamphlets, that rocket fuelled propulsion was not the way to conquer space. He had formulated a series of theories based on electromagnetic fields that, according to him, were much more functional to launch our spaceships into space. Theories that the aliens shared with him.

One day in 1955, Mr Jessup received a letter signed by a mysterious Carlos Miguel Allende, who claimed he was an eye witness to the disappearance of the destroyer, Eldridge, as, at the time of the experiment, he was working as a marine on the Furuseth which was anchored beside it.

Jessup and Allende – a person who was never found as he sent his letters using a return address for an abandoned farm inhabited by ghosts – exchanged, over the next few months, intense correspondence, and with every letter, new, increasingly disturbing information emerged. The Navy was experimenting with the dangerous and uncontrollable technique of tele-transportation, using enormous coils created by Tesla, as a defence from Nazi submarines (in 1943 we were in the middle of the second world war).

The experiment did not go well: the ship was indeed tele-transported for 500 kilometres back and forth but many members of the crew were lost in the space time “continuum” and never returned. The Navy then decided to suspend the experimentation of this dangerous technique and subjected all the surviving sailors to hypnosis, as well as the witnesses of the event, to make them forget what had happened. 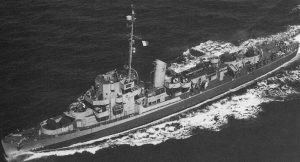 An image of the USS Eldridge at sea

What is really incredible is that many people believed Allende’s declarations, who then said his real name was Carl M. Allen, made through Jessup. Journalists started looking for the sailors of the Eldridge and the Furuseth. It was then discovered that this Furuseth, on the day of the experiment, was sailing in another ocean, but this did not make a dent in the iron-clad certainty of many of Mr Jessup’s supporters, who explained that all of this was part of a plot put into action by the Navy. The journalists also found other witnesses, ready to swear that it was all true.

Among these, the most famous was Alfred Bielek, who claimed he was one of the sailors lost in the dimensional jump and was catapulted for 6 weeks into the year 2137 and then 2 years in 2749. To explain how on earth he had managed to return to the present, Bielek put into play another physics genius, John Von Neumann, who was apparently only able to turn off the electromagnetic equipment, which was still working on board the ship, in 1983.

Bielek became a real celebrity and the talk shows fought over him, offering thousands of dollars. He never let down his listeners and told so many tales we cannot possibly share them all in this article. To those who noted that his stories didn’t all flow together, he would respond: “Well… after three jumps through space and time, it is normal that my memory is a bit jumbled, wouldn’t you say?”.