An outing that will give you a full immersion in the heavenly atmosphere of the Ligurian coast, to breathe, live and admire the breathtaking panorama of the Tigullio. We took the kayak from Rapallo (from San Michele), passed Santa Margherita and went straight to the Piazzetta in Portofino.

Departure is from the Canoa Club di Rapallo, this is where you can rent your kayak and head out towards Santa Margherita. Considering an overall time of over an hour, keeping an easy pace, we suggest departing at around ten in the morning.

The best time of the year for this type of outing is between May-June: it isn’t too hot and you can paddle without suffering from the sun. This mini outing, as we said, departs from Rapallo and, passing through Santa Margherita, and arrives in Portofino. A simple excursion suitable for the less experienced, and those wanting to enjoy a pleasant day in the sea without too much effort.

After about ten minutes, we arrived near the port of Santa Margherita, pay close attention if you do this outing in the summer. It is likely you will run into ferries, or the sailing school out for practice. Passing the port area, we reached the beaches and, after a good fifteen minutes came upon the area of the Covo. This Ligurian club is well known by those who enjoy clubbing and spending their nights dancing away, in the Sixties/Seventies Il Covo was a well-known institution. Back on track we continue our excursion.

We have reached the area of Paraggi, a real paradise for lovers of the sea and divers: there are many divers who choose this area to explore the seabed. In the open sea, during the months of July and August, the water is dotted with dozens of yachts that, leaving from the Piazzetta di Portofino, heading out towards Santa Margherita. Many little ants busily travelling this blue strip. 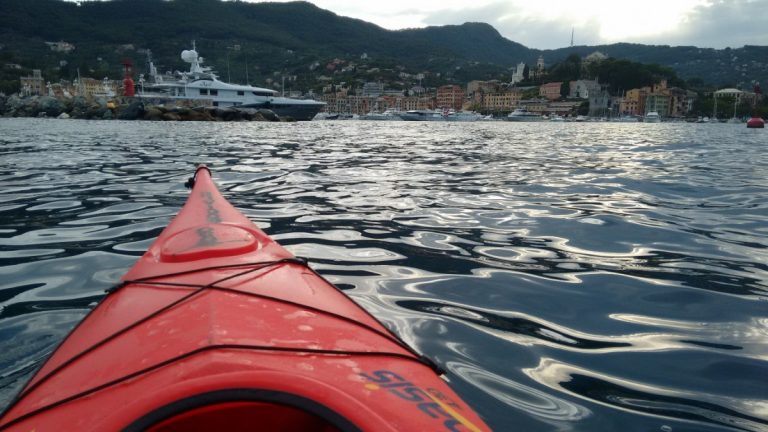 View of Santa Margherita from the kayak

It has been about twenty-five minutes since we started paddling, and we are now in the area of Niasca, a splendid natural cove between Santa Margherita and Portofino. Why not stop hear for a quick swim? We stop just long enough to drag the kayaks onto the beach and go for a dip in this natural pool.

After we start paddling again, we realise we are only a short distance from our destination: our outing from Rapallo-Santa Margherita-Portofino is about to end, and we catch a glimpse of the Piazzetta.

Those seeing these places for the first time are always struck by the lively colours of the houses reflected in the sea, the many boats in the water and the sound of the wind, this continual contrast between nature and urbanization. Breathing in this unusual atmosphere is always exciting.

To return to base and finish this kayak adventure will take about forty minutes. Usually, a bit because we are tired or because we want to enjoy the panorama, the return time is always a bit longer: in a good hour, we have finished our outing.

We recommend having a hearty breakfast about two hours before your kayak outing between Rapallo, Santa Margherita and Portofino. Then, after having placed the kayak back onto the rack, it is good to have a salad or a delicious lunch of focaccia, especially if we are in the summer. A heavy lunch would mean not being able to go back to the water for a while.

We suggest getting further information from the Canoa Club Rapallo (info@canoaclubrapallo.it). If you go out accompanied by a member of the association, the outing is free. If that is not the case, you will need information on rental costs: about five/seven euros. To reach the beach of Prelo (San Michele-Rapallo) the best option is to take the bus. The bust stop is only a short distance away.

A magnificent outing departing from San Michele (beach of Prelo) and arriving in Zoagli, going through Rapallo Physical exercise and breathtaking views: the best way to enjoy your holiday